Previously, Due served as vice president and assistant general counsel of CNN, joining CNN in 2003. Due served as CNN’s chief diversity advisor for almost a decade. She recently completed her tenure as co-chair of Black Professionals@Turner.

As vice president and assistant general counsel, Due provided strategic guidance on media law issues relating to content production and distribution on television and digital platforms. She served as a key resource for digital product teams in advising on evolving technological platforms. She shepherded the development of iReport, which was the first user-generated content website of a major news organization, was an advocate and advisor on the development of “Impact Your World,” CNN’s first pro-social, global, cross-platform programming initiative to empower audiences to respond philanthropically to news events, and advised on the development of CNNgo, a next-generation digital product which gives users unprecedented control over their TV news consumption. Additionally, Due managed CNN’s multinational rights and clearances department. She also oversaw access matters for CNN, with successful lawsuits against the State of Florida for a copy of its suspected felons list prior to the 2004 election which impacted the state’s election policy, against the federal government to gain access to Hurricane Katrina victim recovery efforts which contributed to CNN’s Peabody award-winning coverage, and against local agencies relating to the 2013 death of Kendrick Johnson, which led to the reopening of the investigation into the Georgia teen’s death.

As co-chair of the business resource group (BRG) Black Professionals@Turner, Due helped shape the organization’s mission as “Defining Moments: Building Resilience, Driving Excellence and Moving Forward During Times of Change.” Under her leadership, the group focused on putting the “B” back into the BRG. To that end, BlackProfessionals@Turner developed several workforce, marketplace and community programs that strengthened employee engagement within Turner, provided professional development opportunities, showcased on-air and off-air talent, and created avenues for employees to provide insights on content, fan engagement, and potential new revenue streams during times of significant corporate and industry changes. Due continues to chair a task force on African-American retention and advancement on behalf of the organization.

Prior to that, from 2005-2013, Due served as CNN’s chief diversity advisor. She chaired CNN's award-winning Diversity Council and provided guidance to CNN management on content, marketplace, workforce and workplace initiatives to advance CNN’s diversity mission of growing its business by reflecting diverse audiences and perspectives in its programming and supporting an inclusive culture for its employees. By collaborating with programming, network booking, marketing, sales, PR, HR, recruiting, and talent development, Due's leadership was crucial to establishing CNN's standing with multicultural audiences leading to some major ratings wins, earning revenue in the tens of millions of dollars for multicultural content franchises, increasing CNN's racial, ethnic and gender diversity, launching employee development and student pipeline programs, and expanding the diversity of perspectives and storytelling on air. Due was key to the development of global programming initiatives Black in America and Latino in America, community forum “CNN Dialogues” in partnership with the National Center for Civil and Human Rights and Emory University’s James Weldon Johnson Institute for the Study for Race and Difference, and a company-wide initiative geared toward producing more content for the growing and diverse U.S. Hispanic market.

During Due’s tenure as Diversity Council chair, CNN was honored with significant industry honors that reflected her leadership. In 2007, the organization received the NABJ “Best Practices Award” for exemplary work in covering issues “of great significance to the black community or the African Diaspora and/or for efforts in increasing diversity among newsroom staff and management.” In 2009, CNN received the Corporate Diversity Award from the American Institute of Managing Diversity. CNN was also featured that year for its diversity best practices in a white paper by the Newspaper Association of America for redefining “diversity initiatives in the 21st century” and for using diversity “to help shape strategy, attract new customers, and increase revenue.” In 2010, CNN was honored by the Equality Forum with an International Business Leadership Award for its commitment to a diverse society and workforce and “for reporting with distinction issues about the gay, lesbian, bisexual and transgender communities” and by the Lawyers’ Committee for Civil Rights Under Law for its “unwavering commitment to diversity and...timely and incisive coverage of issues impacting minorities and underserved communities.”

Due herself has been individually recognized for her diversity and inclusion achievements. She was named to Cablefax’s Diversity List and Most Powerful Women List for 2019, named one of the “Top Black Voices in Network News” by Ebony magazine in 2007. She was selected one of the “Second 50 Most Influential Minorities in Cable” by CableFAX magazine in 2008. That same year she was named a “Diversity Champion” by Diversity Edge magazine and was presented with the Ida B. Wells Award by the National Association of Black Journalists (NABJ) and the National Conference of Editorial Writers, which cited her “passionate and impactful efforts to promote diversity in staffing and expanded coverage of minority communities and issues at one of the nation's preeminent news outlets, and for championing the cause of diversity beyond her newsroom’s doors.” She also received a 2008 NAMIC Luminary Award for her commitment to promoting multi-ethnic diversity within her company and for giving back to her community. Due was the 2010 recipient of the corporate award from NV magazine, bestowed upon individuals who have “found a way to raise the standard for how their corporation operates by not only protecting the bottom line but increasing the integrity of the brand.” In 2013, Due was named one of Rolling Out magazine’s “Top 25 Women of Atlanta.”

Due serves as a board member of the National Center for Civil and Human Rights where she recently led the search for its new CEO at the request of board chair The Honorable Shirley Franklin. She is also on the board of the Lawyers’ Committee for Civil Rights Under Law and is president of the board of Kenny Leon’s True Colors Theatre Company in Atlanta. She is a member of the American Bar Association (ABA) Forum on Communications Law and a member of the Buckhead Atlanta chapter of Jack and Jill. Previously, she was a term member of the Council on Foreign Relations and a board member of Vox Teen Communications in Atlanta. Due is a 2008 McCormick Tribune Fellow and an alumna of the Leadership Atlanta class of 2008.

Due has presented or moderated at numerous conferences on media law and diversity subjects sponsored by such organizations as the ABA Forum on Communications Law, the Media Law Resource Center, the National Association of Broadcasters, NAMIC, UNITY: Journalists for Diversity, and the Georgia Diversity Council. Her articles have been published by CNN.com, the MLRC Media Law Letter and The Human Rights Brief.

Prior to joining CNN, Due was associate general counsel for The McGraw-Hill Companies, Inc., where she practiced litigation, intellectual property, and media law. While at McGraw-Hill, Due received a Black Achievers in Industry award from the Harlem branch of the YMCA of Greater New York. She also served as an adjunct professor of media law at Cornell Law School from 2001-2002. Before joining McGraw-Hill, Due worked as a litigation associate at the New York office of Winthrop, Stimson, Putnam & Roberts. In 1994, as a pro bono fellow for the firm, Due worked in Rome as vice president of S.O.S. Razzismo Italia, a non-profit organization that is part of a European network committed to fighting racial discrimination against immigrants and people of color.

Due earned a bachelor’s degree in psychology from Harvard and Radcliffe Colleges and a master’s degree in psychology from the University of Sussex in England by studying race relations and organizational culture under a Rotary International Ambassadorial Scholarship. She earned her law degree from Cornell Law School, specializing in international legal affairs. As a law student, Due was an NAACP Legal Defense Fund Earl Warren Scholar and intern and she also interned at the United Nations Centre for Human Rights. Due most recently completed the NAMIC Executive Leadership Development Program (ELDP) where she studied at the University of Virginia Darden School of Business. 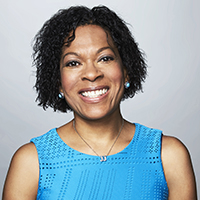