In 1971, she joined CBS News as a national correspondent for the “CBS Evening News with Walter Cronkite.” Based in Washington, D.C., she covered Capitol Hill, the White House, Pentagon, State Department plus anti-Vietnam War street demonstrations and politics in general.

She was assigned important beats: the 1972 presidential campaign of Senator George McGovern (D-S.D.), the 1972 Democratic National Convention in Miami and the Vice Presidency of Nelson Rockefeller. In addition, she joined the White House press corps overseas to report on the Nixon/Brezhnev SALT I talks and President Nixon’s final trip to the Middle East.

Her most memorable story was the event of the decade, Watergate, the House Judiciary Committee hearings and the subsequent resignation of President Richard Nixon.

In 1976, Connie moved to Los Angeles, where she spent seven years as an anchor at KNXT-TV (now KCBS), the CBS-owned station. She anchored the 4:30pm, 6pm and 11pm local newscasts.

Connie rejoined CBS News in 1989 as anchor and correspondent of “Saturday Night with Connie Chung” and also anchored the Sunday edition of the “CBS Evening News.” In 1990, she became the anchor of the Emmy Award-winning CBS News primetime magazine program, “Face to Face with Connie Chung.” During that time, Ms. Chung conducted a series of exclusive interviews, including the first and only national television interview of Joseph Hazelwood, the Captain of the Exxon Valdez which resulted in one of the most devastating human-caused environmental disasters; and the first interview with Los Angeles Lakers star Magic Johnson after he announced he was HIV positive.

From 1993 to 1995, Ms. Chung was named co-anchor of the “CBS Evening News with Dan Rather and Connie Chung,” the first woman to anchor the network’s national flagship news broadcast – a milestone in television news. She was the second woman in the history of television news to anchor any evening newscast.

During that time, she covered the historic Israel/PLO signing ceremony at the White House, the Israel/Jordan signing ceremony in the Middle East; and she got an exclusive interview with Chinese leader Li Peng, on the five-year anniversary of the Tiananmen Square massacre. While anchoring the Evening News, she also was anchor and correspondent of “Eye to Eye with Connie Chung.” Ms. Chung was a floor reporter for CBS News during the 1992 national political conventions and provided analysis during Election Night coverage in 1990, 1992 and 1994.

In 1997, Ms. Chung was a Harvard fellow at the Joan Shorenstein Center on the Press, Politics and Public Policy at the John F. Kennedy School of Government at Harvard University.

In November 1997, she joined ABC News as co-anchor and correspondent on the ABC News primetime news magazine “20/20.” During the 1999-2000 “20/20” season, Ms. Chung was awarded the Amnesty International Human Rights Award for her report that revealed that young women in Bangladesh were brutally burned with acid, in acts of revenge for turning down a man’s advances.

Also during the 1999-2000 “20/20” season, Ms. Chung won several awards for “Justice Delayed,” an investigative hour that uncovered new information in the 1966 murder of a black Mississippi man named Ben Chester White. As a result of the new information, the U.S. Justice Department reopened the case and indicted, tried, convicted and sentenced Ernest Avants for the murder. Avants had lived as a free man for three decades, since his acquittal on state murder charges in 1966.

She has received three Emmy Awards, including two for Best Interview/Interviewer. In addition, she is the recipient of a George Foster Peabody Award, honors from American Women in Radio and Television, Outstanding Young Woman of America, an Amnesty International Award. She was named a “Giant of Broadcasting” by the International Radio-TV Society and Womankind’s Phoenix “Woman of the Year.”

Ms. Chung graduated from the University of Maryland with a Bachelor of Science degree in 1969. She also has honorary doctorate degrees from Brown University, Providence College, Wheaton College, Norwich University and California Pacifica University.

She and Maury Povich were married in 1984 and have lived in Manhattan since then. They have one son, Matthew. 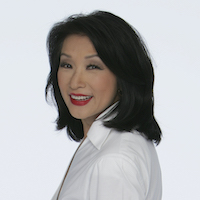